Harper’s Bazaar seems to get all the flack for prioritising top advertisers to be featured in their editorials just because they got caught. Racked got their hands on an internal document listing advertisers and non-advertisers in order of importance. But is that really a surprise to anyone and do you actually believe Harper’s Bazaar is the only major print magazine doing this?

Do you really think it’s a coincidence that Vogue featured the hell out of Louis Vuitton, Prada, Miu Miu Fall 2010 collections? Top magazines always feature the big established brands in their editorials because they throw the big bucks on advertising. If you’d take Vogue and Harper’s Bazaar as fashion authority – you wouldn’t know contemporary or avant-garde labels even existed.

So really, if anyone is going to call for an FTC investigation, call it for all the major magazines, don’t single out Harper’s Bazaar. 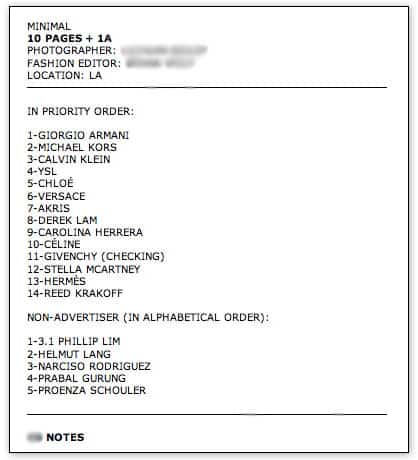