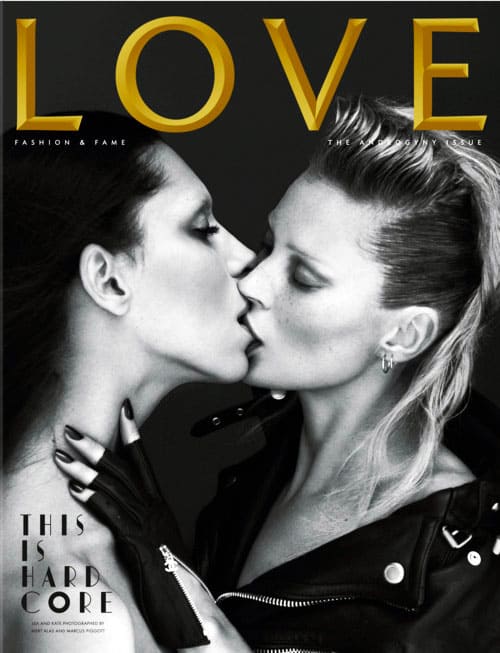 Love Magazine unveiled their forthcoming 5th issue, called ‘Androgyny’, with a bang. Out of a total of three covers photographed by Mert Alas and Marcus Piggot, the first one revealed is a butch Kate Moss kissing the transsexual model Lea T. The other two covers will be single shots of Kate Moss and Lea T. The issue, as you might have figured out by now, will be themed around androgyny.

You might be most familiar with Lea T as Ricardo Tisci’s muse. Tisci drew her into modeling by having her model in Givenchy’s Fall 2010 Haute Couture presentation and Fall 2010 ready-to-wear campaign last year. Since then she appeared in French Vogue (NSFW) and featured in a New York Times article about transsexual models.

Love Magazine’s Katie Grand said of Lea T, “I was by the pool at the Copacabana Palace Hotel when I saw her. At first I didn’t notice her gender, just that she was wearing Givenchy couture and looked amazing!”